In the aftermath of last Sunday’s episode, Kandi Burruss recently sat down with her longtime friend and assistant Don Juan to address all the chaos viewers saw before, during, and after #Strippergate. According to Kandi, even though many presumed she wouldn’t speak on what happened, she thinks at this point we should all know her a little bit better than that.

“First of all,” Kandi began in the video, “If y’all ain’t learned nothing about me in this decade that I’ve been on Real Housewives of Atlanta, you should know that I say how I feel. With that being said-” she started before being interrupted by Don Juan. He stopped her to highlight the tricky dynamic Kandi faces while being close with the other cast members — who are her friends — but also need to keep it real and hold her co-stars accountable.

“But see, you know what — and I don’t even mean to interject on that,” Don Juan said. “But I think that that’s where people get it twisted. They feel that because you’re friends with people that you can’t or won’t say what you feel. And I think they feel the same way, like, ‘You’re not supposed to, that’s your friend. How can you comment on that?'”

Agreeing with Don Juan’s point, Kandi used Kenya’s judgemental behavior after the events of #Strippergate as an example of what she meant. According to her, it sometimes feels like it’s a losing battle regarding whether she disagrees with her friend’s actions and calls them out on it publicly, or she doesn’t. When it comes to Kenya, the singer-songwriter said that “at the end of the day,” what matters to her most is their friendship — even if they had opposing views on how best to treat the other women the morning after B.O.L.O’s visit.

“Yeah,” Kandi agreed. “I think it’s unfair actually because I see some people who you know, say stuff like — anytime we say anything like — I’ll just use the whole Kenya situation as an example. If I say anything that’s disagreeing with Kenya, people be like, ‘Oh, you’re not a real friend to her and blah blah blah.’ At the end of the day, she and I are real friends. I love her very much. But obviously last week I disagreed.”

For the record, Kenya received a good amount of criticism for the way she interrogated the other women in Sunday’s episode about whether or not they slept with B.O.L.O. As Kandi shared, the two of them did have very different approaches to how they handled the events that went down that night. If you’re interested in the rest of her and Don Juan’s thoughts on last Sunday’s crazy episode, you can see it all down below. 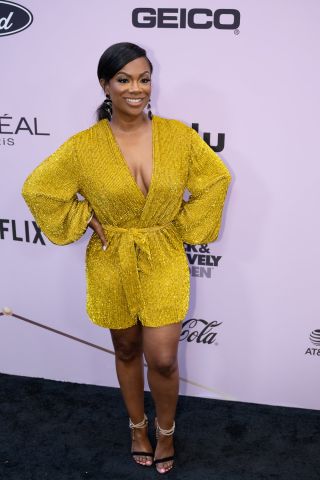 5. Ariana Grande- break up with your girlfriend, i’m bored

6. Ed Sheeran- Shape of You

10. Kim Zolciak- Tardy To The Party

Happy Birthday, Kandi Burruss! 10 Songs You Didn’t Know Were Written By Kandi
Though she’s cast member of Real Housewives of Atlanta, Kandi Burruss is far from being just a housewife. As a singer, songwriter, actress, and entrepreneur she’s let her hard work shine through in many different ways over the years.

Famously known for being a member of the hit 90’s group, Xscape, her songwriting discography is lengthy as well. As a multifaceted queen, she’s written songs for celebrities like P!nk, Alicia Keys, TLC, any many more. As we celebrate her birthday, check out songs we bet you didn’t know were written by Kandi.

HEAD TO THE RICKEYSMILEYMORNINGSHOW.COM HOMEPAGE