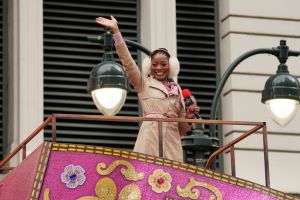 Black Twitter continues to be one of the most culturally relevant spaces across social media due to the innovative and quick-witted memes, hashtags, and jokes that fly off at will. The current meme craze where people take modern photos and alter them to look dated claiming some sort of connection, Keke Palmer hopped in on the joke and Halle Berry followed with a timely response that has folks talking.

For context, folks on Twitter have been posting video clips or photos of figures both known and unknown, including Saucy Santana, Andrew Caldwell, and many more. To be clear, this meme craze was separate from what is being called the “Keke Palmer Joke” which we’ll explain below.

An older photo of Palmer wasn’t initially part of the aforementioned meme rollout but a Twitter user formerly known as @TrixieNumba9, who has a penchant for going viral and now tweets under @TrixieNumbaNine, made a tweet using Palmer’s headshot from the Akeelah and The Bee film, writing in the caption “All the girls who looked like this in high school could suck a mean d*ck.”

TrixieNumba9’s tweet did its numbers, leading to an unnamed person sending her a direct message to take down the photo, claiming it was his sister who was killed. TrixieNumba9 shared the exchange between her and the person, explaining bluntly, “Baby, this is Keke Palmer. This is motherf*ckin’ Keke Palmer” and the rest is history.

Palmer then shared the doctored photo via Twitter following the “Historic figures” theme writing in the caption, “My granny was such a vibe in the 1940’s” which prompted Berry to quote retweet and wrote in the comments, “Baby, that’s Keke Palmer” thus making the joke more meta than ever.

There have been some rumblings on Twitter than the individual that initially messaged TrixieNumba9 did lose a sister tragically and that they may have resembled each other. If true, condolences to the family first and foremost.

However, Twitter is keeping things light and focusing on the funnies at the moment and we’ve got the reactions to the Keke Palmer and Halle Berry exchange above. There are some who found the “Baby, that’s Keke Palmer” joke overdone but plenty others found humor in the revival that Palmer and Berry enacted.