With five studio albums, iconic fashion moments that shaped the 90s and 2000s fashion scene, countless accolades and deserved reverence from her peers, Lil Kim’s influence on pop culture is immeasurable. And she keeps expanding her resume.

Recently, the rapper turned-television-personality was tapped to be the narrator of “American Gangsters: Trap Queens” on BET+, a true crime series detailing the criminal chronicles of some of America’s most notorious female gangsters. As the leading lady voice for the return of season two, Lil’ Kim will take audience viewers on a journey through the stories of fierce, savvy Queen-pin leaders whose crimes ranked from grand larceny and multi-million dollar white collar schemes to bank and wire fraud and drug trafficking. If you’re looking for a binge worthy series filled with rise, fall and redemption of an empathetic antagonist, this is the one for you.

Ahead of the “Trap Queens” premiere on BET+, we connected with the “Crush On You” rapper to chat about lending her legendary voice to the second season, her definition of what a true trap queen is, and some of her personal favorites when it comes to her iconic throwback looks throughout her career.

“I feel honored that BET called me to do this. What other better person to do a narration for a bunch of trap queens than the gangstress Queen Bee herself? Trap Queen Kimmie!,” said a soft-spoken Kim before chuckling. “I know I’m not alone but it always reminds you that you’re not alone, people always have similar stories to your own and there are women out there who went through worse things than you have.”

The veteran femcee continued to explain how the show reminds viewers to practice gratitude because many of the story subjects almost didn’t make it through. “In some sort of way, these women are kind of heroes because they survived the unsurvivable. That is celebratory in its own [way]. I think every person, not just women, in the world wants to get money back. Everyone wants to get rich quick – get rich fast or die tryin’ like 50 [Cent] said. With that being said, these stories are so relatable.”

With the name in the title, I couldn’t move forward in the interview without asking the Queen B herself about her definition of a trap queen. Fetty Wap put the term on the map in his 2015 summer banger, but I had to ask the O.G.”The Jump Off” raptress herself. “My definition of a trap queen summed up really quick is some queens growing up in the trenches and gettin’ it out the mud by making something out of the mud. Building houses out of the mud and going through such deep, severe adversity. Whatever you have to do by all means to get it, that’s trappin’.”

“A lot of girls’ hustles are different. Girls are in the street dealing drugs and moving in through the traffic that way. Then you’ve got some girls who are getting with these guys and they put them onto all kinds of hustles. Trappin’ is just getting it by all means necessary,” she explained.

While we were on the topic of this new true crime addition to the BET+ roster, I asked Lil’ Kim about her definition of a fashion crime. “Fashion is an artistic language. People get to speak through their fashion,” she expressed. Kim went on to dish about her friend who had a favorite pair of Tony the Tiger sneakers with tails on the back and though she originally questioned their taste, she knew and respected how much they loved the shoes. “Fashion crimes are things you see that aren’t supposed to go together but I don’t look at it as a crime. I look at it as, ‘to each their own fashion.'”

She used Tyler Perry’s “Meet The Browns” character Mr. Brown played by David Mann as a prime example. “He’s a mess but I wouldn’t want to see him dressed any other way!,” she bursted out into laughter as she praised the one-of-a-kind stylings of the fictional character. “He would be the idea of what you would call a fashion crime but I love him so much. It goes with his personality and character.”

As a hip-hop icon and fashion statement-maker, Lil’ Kim has been around to see Black culture have a heavy impact on the world of fashion – mainstream and underground. “It’s always been hand-in-hand,” she said about the relationship between fashion and hip-hop. “I’m one of the people who set that trend by being embraced by Donatella, Marc Jacobs, Alexander McQueen and John Galliano. They embraced me quickly in my career and it was at a time where a lot of musicians were not being embraced by the major designers. I’m one of the first ones next to Diddy.” 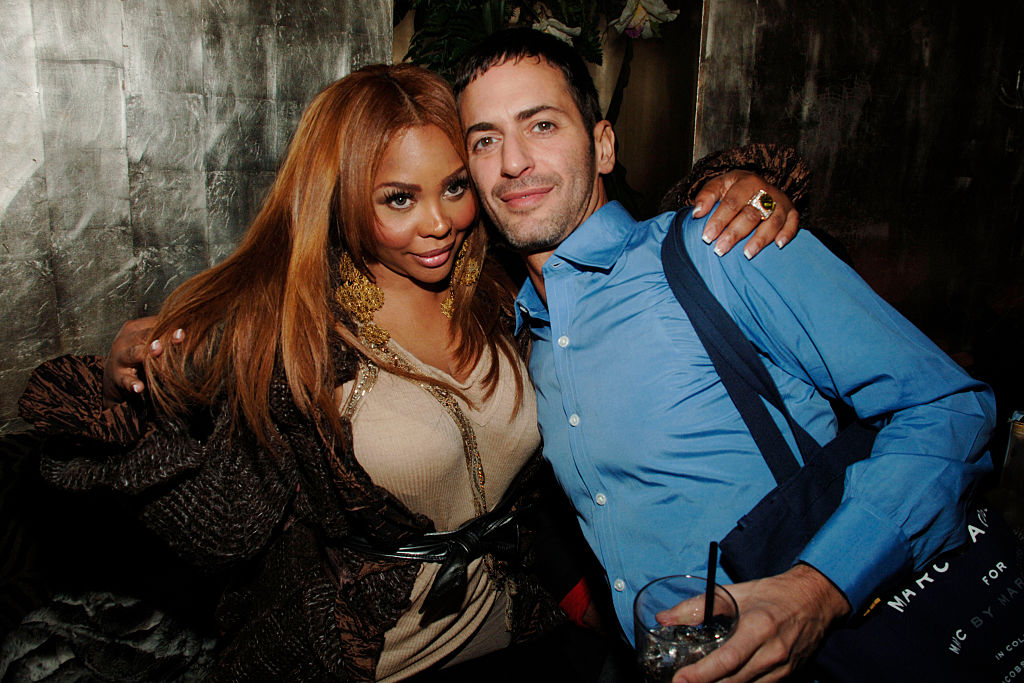 “Recently, I think the industry has gotten that,” Lil’ Kim said about the efforts of major designers and brands who recognize the influence of hip-hop on fashion. “The fashion world is seeing that they need the music, too. The fashion world has always used music as their motivation because I know when I used to fit and me and Marc [Jacobs] would have lunch in his showroom while he was creating looks for one of his fashion shows, he would always be playing my music. He would be playing ‘How Many Licks?,’ and I would be like, ‘You know this song?’ He would be like, ‘Girl, please!,’ and that’s when I first met him. I was so shocked but I was more shocked that he knew almost every song!” That moment for Lil’ Kim solidified her theory that hip-hop and fashion cannot coexist without one another.

As we walked down memory lane together, Lil’ Kim told me about some of her fashion favorites throughout her career including her famous Louis Vuitton body paint for her Interview Magazine cover back in 1999 and the 2003 cover of NYLON with colorful teddy bears on her skirt with a Dior credit card holder around her neck. “I think my historic, classic moments like the purple pasties and the leopard bikini will always be in my hall of fame. Those will be on my Wall of Fame forever!,” she boasted – as she should! 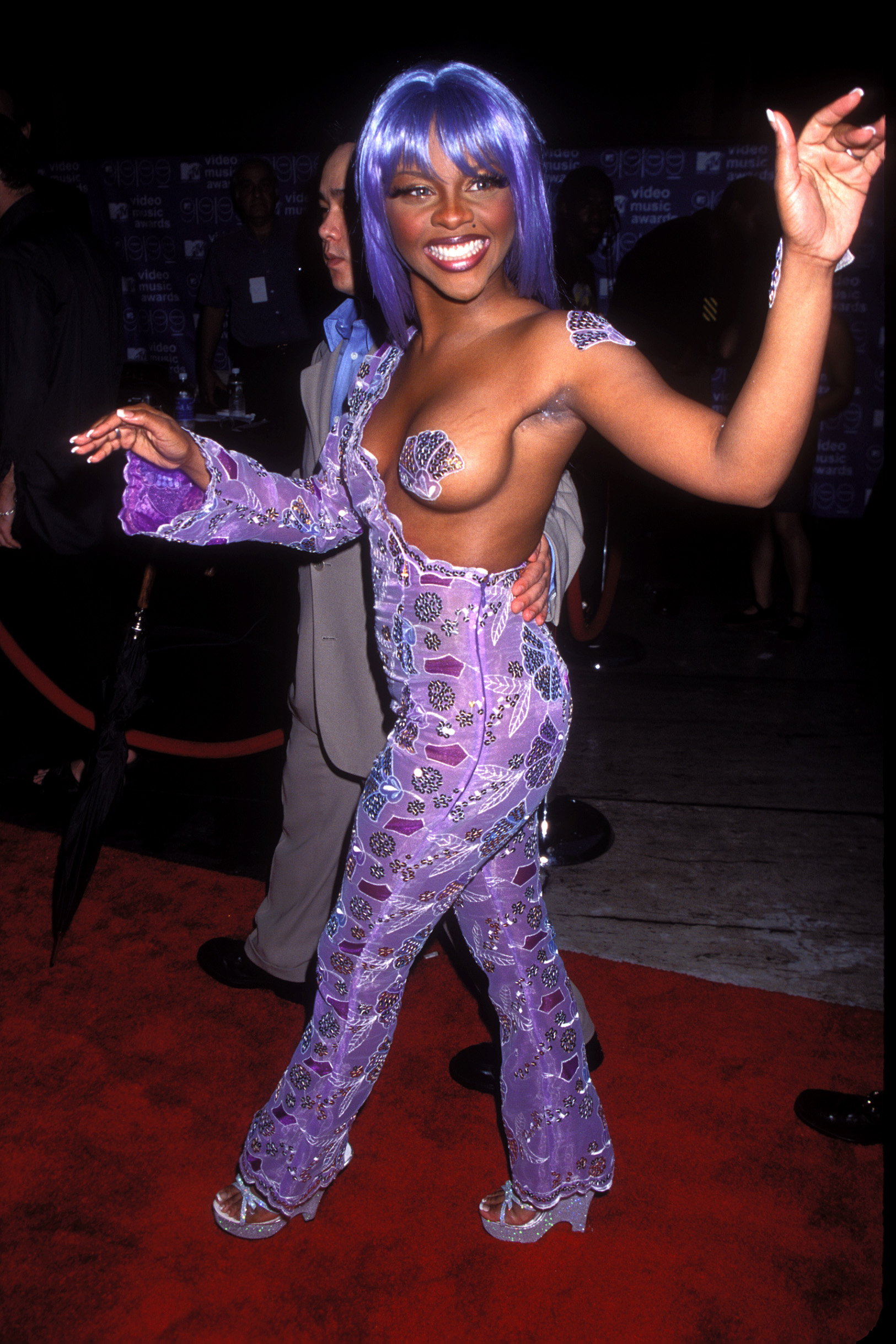 “The leopard skin bikini would definitely be one of my top tops. I was just feeling sexy that day and I was young, but I was feeling sexy. I just naturally dropped into that pose but Biggie picked the photo,” she revealed. “I knew I had done something right.”

While her sex appeal has definitely caught the public eye, embraced by many and shamed by some, the “Let It Go” collaborator had a few words for the haters. “I don’t think anybody should judge anybody. Who are you to judge? A lot of people who are boisterous, who get upset and do mean things by telling people that you shouldn’t do this or that, most of those people secretly want to be you. I witnessed that,” she explained.

“When I was coming in hardcore, that caused so much hysteria but then later on, the whole world was like ‘We love her!’ and I inspired them. That’s just how it goes. Most of the time, they come around.” Though nowadays with rappers such as Megan Thee Stallion, Mulatto and City Girls, embracing your sexy isn’t an issue in the music industry because of its normalization, Lil’ Kim believes that the focus has shifted. “I think we have so many bigger issues.”

Little Lil Kim has created some of the most memorable looks in hip-hop (in entertainment, in general) and I’m confident there’s no argument there. However, I wanted to get her own take on some of her looks throughout the years and know if she had any style setbacks. “I really don’t regret too much in my career or my life. Of course, some things you wish you could do differently but I can’t really think of those things right now,” she admitted.

“At the end of the day, I feel like I’m where I’m supposed to be by God’s choice. Don’t get me wrong, I’m always striving for more when I say I’m not where I know I’m headed. You know how some people say, ‘I’ve made my mark already. I’ve lived,’? I don’t feel like that. I feel like I’m just beginning that next chapter.”

Obviously as a fellow Brooklynite and Bed-Stuy native, I had to share my backstory with my New York sister. Once we shared an “Aye” together, we had officially become best friends in my head. As a fearless fashion icon, I had to ask Lil’ Kim how she incorporates her hood into her style and what advice she would give to others who are trying to be more themselves through their fashion choices.

“Well, that’s nothing I can give. It has to be in you and not on you,” she said passionately as I received every word. “That’s something that you kind of have to pick up from your hood. You have to just know and when you know, you know. I’m sorry I don’t have advice for that one but at the end of the day, there’s no such thing as bad style. Your style is your style.”

Then & Now: Lil Kim Through The Years


Lil’ Kim: My Legendary Leopard Bikini Will Always Be In My Fashion Hall Of Fame
was originally published on
hellobeautiful.com