We all know and love Vivica A. Fox as the spirited actress, model and talk show host who’s played an integral role in Black culture’s entertainment and film scene for decades. These days, Fox is flexing her talent behind the lens as an executive producer for five thrilling Wrong Movies for Lifetime Movie Network’s successful franchise. She kicked off 2021 with the premiere of “The Wrong Real Estate Agent” alongside the charming and versatile Andres Londono.

Fox has been “busier than ever” during the pandemic – she moved into a new house and worked on five films as soon as the entertainment industry was greenlit to move forward following COVID testing. “It gave me time to sit still for a second because I’m always traveling, I’m always doing an appearance,” she admitted to me. “It gave me time to get organized.”

Before the new year and the premiere of “The Wrong Real Estate Agent,” we spoke exclusively with the “Cocktails with Queens” host about her passion as an executive director for Lifetime’s The Wrong franchise, how sexuality and body positivity has been redefined over the years and her secrets for keeping her body tight and right while social distancing. Check out HelloBeautiful.com’s conversation with the actress below!

HelloBeautiful: How important is your passion to be in positions of power and creativity when it comes to your upcoming projects?

Vivica A. Fox: I’m so blessed when it’s a Foxy Brown Production, which is the name of my production company where I wear a lot of different hats and I’ve earned to wear those hats. I love that sometimes my phone is ringing off the hook about casting, consultations and wardrobe – the films are a true reflection of me becoming a filmmaker.

HB: When it comes to wardrobe styling versus glam and makeup as an actress, which do you prefer?

VF: I love both to be very honest with you. I started off as a model years ago. That was the one thing when I first started doing these films over and over. I kept saying, “we have to start integrating some color and fashion and we have to step it up.” I just believe that bright colors and fashion are some things that people also like to watch in a movie. It’s so easy to turn around on Twitter and be like, “I wonder what she got that dress from” or “I love that color on her.” We always integrate the color yellow into every film and my characters always wear yellow. I just always want there to be sunshine!

HB: Speaking of modeling, you recently did a photo dump on Instagram on some of your favorite swimsuit photos. How has the body positivity movement and the definition of a woman’s natural sexuality evolved since you began modeling?

VF: Gosh, I’m just so glad that they’ve started letting people look like real people do. I remember there was an era happening during the late 80s and 90s when all of the actresses and everybody were like anorexic. They were just the wrong images of women because we come in all shapes, sizes and colors and we all can be beautiful. I’m grateful that now you see women of all different sizes and colors in movies that represent their people and everyone isn’t that same little skinny person walking around. I could have a little bite to eat! I’m so happy that when people try to “fit front,” fat shame or body shame somebody, people immediately come to their defense to say that you’re beautiful. You don’t have to be a size two to be beautiful in the skin you’re in. I’m 50 and I’m finally completely happy in the skin that I’m in, but I do workout and take care of myself, too.

HB: I don’t see 50 when I see you – you look amazing! What is your health secret and how do you keep yourself snatched?

VF: It does help that I see myself on camera especially during the pandemic when everyone got a little COVID fluffy. I’m not gonna lie, I probably gained five pounds at first until I started working a lot because I have a streaming show, a podcast, movies with David then I was like, ‘Woah!’. At first when COVID broke down, I thought I don’t have to be a certain size and I don’t really cook that much so I was enjoying McDonald’s. I’m not even gonna kid you, I had shakes, Filet-O-Fish, french fries – I was grubbin’ which was not good for me, but I did enjoy it for a second. I really try to maintain a healthy diet with lean meats, proteins, vegetables, I drink a ton of water and lately I’ve taken up this thing called Kika Stretching.

It is quite literally an hour of just stretching. It brought me back to the days of ‘Kill Bill,’ and for ‘Kill Bill’ we trained for like 6 to 7 hours a day. What people don’t realize is that stretching is so vital because your muscles will tighten up on you if you don’t stretch. I was just introduced to Kika Stretching about a month ago. 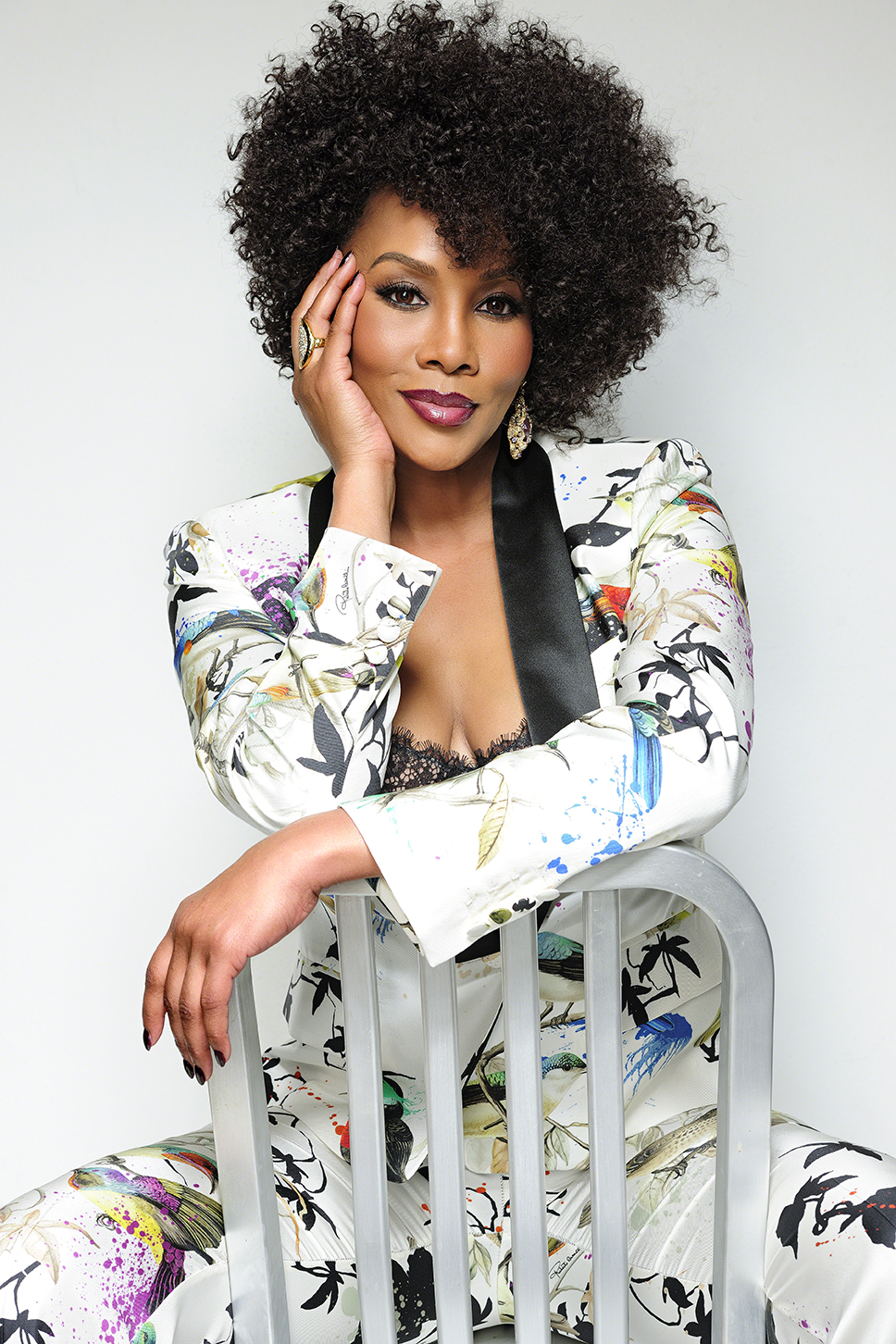 HB: You are super versatile when it comes to your hair. You have inches, ponytails, braids – everything! What have been some of your favorite hair styles of 2020?

VF: I finally got to wear some bangs again and I love that I rediscovered them! For the longest time, I couldn’t wear bangs because – and I’m gonna be honest with you – I was going through menopause and that bang on my face was not making it. I also love that everyone’s wearing long hair and I never thought I would see the day where girls are literally wearing hair down to their ankles. It’s crazy but it’s profitable. I love color – a good burgundy, pink, blue, grey or anything. The bobs are one of my favorites, too!

HB: If you could give one beauty tip for the readers to carry with them into 2021, what would it be?

VF: Skincare. You’ve got to start with a good canvas, girlfriends. Take care of your skin so that everything that you put on top of it is just a bonus to enhance your beauty, but take care of your skin. That’s what it starts with – and your inner spirit. Make sure you want to be beautiful on the inside, want to be around good people, want good things and have good inner beauty because it radiates out.


Vivica A. Fox: I’m Finally Happy With The Skin I’m In
was originally published on
hellobeautiful.com